My kids love their times to watch TV but I am picky about what they watch. I like it to be a good , fun, clean, at least semi educational show. So we typically watch alot of PBS, noggin and disney. Well NBC has a cute show called Zula patrol and we got to watch it for the first time and I must say we were impressed. We watched "The Zula Patrol: Animal Adventures in Space” and “The Zula Patrol: Moons Mayhem" on DVD. My favorite was the Animals in space video but they both were awesome. My kids loved watching and learning how a catterpiler turns into a butterfly. Now they are searching all our bushes for pupas lol. ZulaWorld.com

Here is a short over view of each DVD: 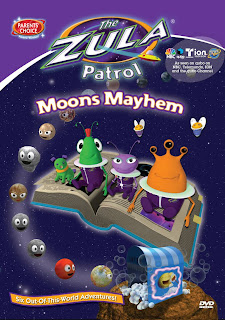 The Zula Patrol: Moons Mayhem follows the intrepid team from Zula in six humor-filled stories that begin with a challenge, and end with a resolution, as they explore the fascinating, often volatile world of moons. The episodes include: Moon Struck, Blue Moon, Going Through a Phase, Moons Mayhem, Three Ring Gorga and Me, Myself and Io. It’s non-stop lunar adventure for The Zula Patrol, as they as they rescue a turbulent Venus, who is on a quest to acquire a moon of her own; discover the many moons of Jupiter during Jupiterfest; explore the composition of the surface of Earth’s moon; help save Bula from an awful Were-Mouse curse, and thwart Dark Truder’s nefarious plan to steal all the moons within the solar system. 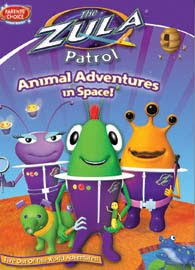 The Zula Patrol: Animal Adventures in Space!, the team explores how insects, reptiles, mammals, plants and rocks form and interact with each other. In Larvae or Leave Me (the first episode), Skip the grasshopper can’t find his friend Wriggly the caterpillar – until he discovers, with help from The Zula Patrol, that Wriggly has transformed into a beautiful butterfly! Four additional stories on the DVD are: Egg Hunt, There Goes the Neighborhood, Choosing Sides and Camp Worm. No job is too big for The Zula Patrol, as they search for stolen frog eggs, help restore life to a canyon ecosystem, solve the mystery of the missing honey, and tunnel through dirt with their worm comrades to help the trees grow – and end up thwarting a threatened “alien invasion” from another planet.ZulaWorld.com
Now my two oldest are getting to that age where they dont like the little kids shows but they really enjoyed these. I think it was the whole science and learning in them that drew my oldest two in and the younger ones loved the cutest little aliens especially the alien dog. So if your looking for a great educational show for your little ones I recommend you check these out at ZulaWorld.com plus I noticed at Redbox they have the Moons Mayhem one so awesome. Yes I am a big redbox fan haha.
Well Zula patrol is giving one of my lucky readers both of these Dvds and Ten runner-ups will receive a one month VIP membership to The ZulaWorld.com that is great!
To enter:
1. go to ZulaWorld.com and tell me something you liked
Extra entries
2.Follow me
3.sign up for my rss feeds
4.Blog about this giveaway this will count for 3 entries
5. add my button to your site
6.link to this page for 4 entries
7.follow me on twitter (collyn23) and tweet this contest
8.Enter my other giveaways 1 entry for each entered
9.Fav me on Technoratti
10.add my blog to your blogroll counts as 3 entries
Posted by collyn23 at 8:53 AM

I found out it is a fun site with lots of cool things to do!

I entered your pawparizzi giveaway

I entered your curious chef giveaway

I entered your reli on thermometer giveaway

i liked that they have games on there site..my daughter loves to play games on the computer..thanks
flower_child_23(at)hotmail(dot)com

I like that its only 5.99 a months to join the site

I entered your curious chef giveaway

I entered your modbe giveaway

I entered your reli on giveaway

I entered your my punch bowl giveaway

I entered your smart pocket giveaway

I love the cloloring pages on the site

What I like most is it is geared for tots to tweens, and if they are learning facts about science.. then pass it along to me, with different age groups of kids and grandkids visiting,I think they will enjoy the DVD's
karenmed409 at comcast dot net