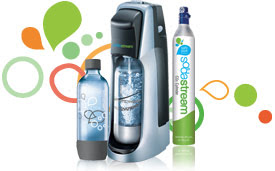 At our house we do drink soda, and flavored water even energy drink. They can get quite expensive fast. We have been drinking alot more water but some days just call for a soda. Well we got the chance to try out soda stream and we love it. We can make our own soda fresh daily. We can have a different flavor if we want it is awesome. http://www.sodastream.co.uk/gbretail/Home.asp

The first flavor we tried was the root beer because really who can resist a good root beer or root beer float right? So we easily figured out how to set the machine up and got some cold water and put it into the bottle screwed it on and began pressing the button to carbonate the water. That was neat to watch regular water turn into carbonated water in seconds. Then we took a cap full of the mix and poured slowly into the bottle of carbonated water and shook gentle. Wah lah done root beer in about 1 minute. The best part was we made it. It like a sense of accomplishment ha ha. Then the taste test. Hmmm tastes like root beer, Yummy! The second flavor we tried was the energy drink. My hubby is a big energy drink freak or should I say a red bull freak ha ha. So we did the same as we did with the root beer and mixed it and he tasted it and was surprised. He loved it and said it tastes exactly like red bull. That sold him instantly. He is a fan and is bragging to everyone about his homemade energy drinks ha ha what a dork!http://www.sodastream.co.uk/gbretail/Home.asp

The next one I tried was the orange because I'm a big fan of orange sunkiss or the old orange mountain dew which is no longer sold so sad!! So I was determine to try and hope this taste good as it ha ha. Well made the same way as all the others and i must say it is pretty similar to the orange sunkiss soda. Not bad! 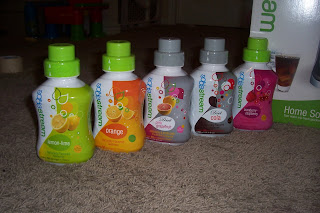 Other flavors we liked was the cranberry raspberry which was sugar free but yummy, and the lemon lime taste like a sprite so that's great. Like I said it was a sense of accomplishment when you can say to people i made that ha ha. The only thing we didn't like was the water essences to make sparkling flavored water just not what we expected and we personally didn't care for them. The soda flavor though we love and will be back for more! We are definitely sold on this and love it! Check it out for yourself at http://www.sodastream.co.uk/gbretail/Home.asp
Posted by collyn23 at 9:34 AM

Email ThisBlogThis!Share to TwitterShare to FacebookShare to Pinterest
Labels: Review

I love the new look of the Soda Streams! We have one of the older ones, and this is by far one of my favorite products :D