The Chronicles Of Narnia: The Voyage of the Dawn Treader Review Movie Synopsis:
Return to the magic and wonder of C. S. Lewis' epic world in this third installment of the beloved Chronicles of Narnia fantasy-adventure series. When Lucy and Edmund Pensive, along with their cousin Eustace, are swallowed into a painting and transported back to Narnia, they join King Caspian and a noble mouse named Reepicheep aboard the magnificent ship The Dawn Treader. The courageous voyagers travel to mysterious islands, confront mystical creatures, and reunite with the Great Lion Aslan and a mission that will determine the fate of Narnia itself! 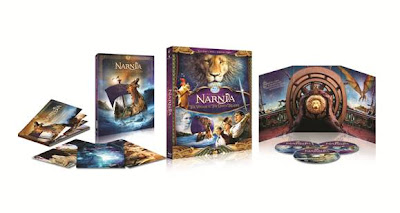 from Amazon.com for only $16.99, or on Blu-Ray!  For lots of interactive fun, be sure to visit their website where you can view movie stills, play games, watch clips and more. 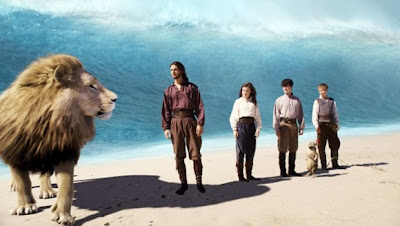 Me and my family were excited to watch this one since we have watched the other two and I read the book when I was in school. Such a classic story and now movies. We love them. It kept us all interested through out the whole movie. We just couldn't wait to see what happened next. The animation and real life coming together always intrigues my kids and their imagination. This movie had lots of action and had a awesome story line. We definitely give it 2 thumbs up! I would recommend it for all ages! So if you or your loved one love the whole Chronicle of Narnia series or just love movies your whole family will enjoy you have to check this one out you will love it!
Posted by collyn23 at 11:03 AM