Smallville and Superhuman powers which one would you chose? 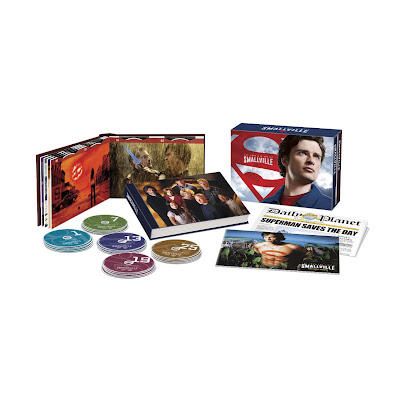 As you heard before how much I love Smallville and was so sad to see it end after 10 years. Looking back over those ten years and watching Clark grow and learn his Super Human powers was fun and exciting. I always dreamed about if I had super powers what I would do with them.

One episode I remember the most was the "Pilot" Season 1, Ep. 1 The earliest manifested Kryptonian power which allows Clark to move at speeds faster than the speed of light. In Season 1 "Pilot," Clark misses his bus but reveals his super speed when he outruns it through a cornfield. This is one of the superpowers I would chose. I would love super speed. Can you imagine cleaning the house in like 5 seconds and being able to visit family and friends in another state in matter of minutes wow! Also with being a mom to 6 I could be in 6 places at once pretty much without missing anything. This would be so handy! I want Super Speed lol!


Gosh I still cant believe Smallville is over but at least The 'Smallville: The Complete Series' DVD lets you experience the exciting journey Clark Kent embarks upon to realize his destiny! With over 24 hours of special features and 2 hours of never before seen footage, the complete series on DVD is the ultimate resource for the Smallville fan! http://amzn.to/m9qILM So head over and check out this awesome deal and awesome show! Get your copy before it is gone! See all the episodes I have shared with you and many more and I know you will love it like I do!

"I have been hired by Warner Bros WBWord division to raise awareness for 'Smallville.'"
Posted by collyn23 at 4:20 PM