Supernatural: The Anime Series on DVD and Blu-Ray 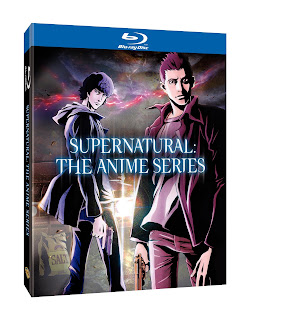 The creators of Supernatural were able to construct an animated world in which there were no boundaries. This new look into Supernatural brings new perspective to the show. From adding color, intensity and action to scenes, to vivid images of horrifying demons, the medium does not disappoint. This so make this show stand out beyond the others  I think!

I love that since I watch the real show and then watching the anime version it gives it a new perspective on the show without changing the story line. I think about my life and looking back on it now knowing what I know and looking at it in a new light how things have changed and my perspective has changed now looking at it from when I was actually living it! I also think about if I was going to do a show about my life if I would want it on film or anime. I think both would be cool but if I had to chose one I think Anime because my life I think could be represented and told better in a cartoon. I know it might seem fake but I think parts of life feel like a cartoon where if it was told as a film I think it would be one of those lifetime series haha. Supernatural I think is the same way. Since they are chasing demons and all it fits the Anime better then film even though both are awesome.  You have to check out this show and you can order your copy of Supernatural: The Anime Series on DVD or Blu-Ray here today: http://bit.ly/p0WOMq ! So check it out!

I have been hired by Warner Bros. WBWord division to promote Supernatural: The Anime Series on DVD/Blu-Ray.
Posted by collyn23 at 9:06 AM