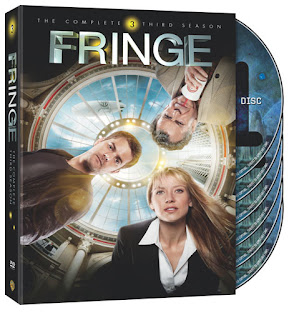 As you know I am in love with the show Fringe. Season 3 had so many great episode but nothing can compare to the final episode of Season 3, Peter made the decision to sacrifice himself thus altering the future. If you were given the opportunity to change the future, would you take matters into your own hands, or would you trust in fate? Honest I don't know what I would do. Know though I have a family and 6 kids and I would want the world to be better for them I think I would say my goodbyes and probably do exactly what Peter did to save the world. I mean really your life that would end in tradegy anyways just some extra time with the ones you love or give up your life so that the whole world could have a better life. To me that's a easy question. I mean yes it would be hard to give up the ones you love but I want them to have a better life. I have always believed in Destiny and fate but when you screwed with Destiny and fate in the beginning then all bets are off and life isn't the way it was meant to be anyways right? That's how I feel about it.

Even though the last episode was sad and emotional and like what nooo! It was still one of my favorite episodes. I cant wait to see what season 4 has in store for us. If you haven't watched the show or missed some episodes, order Fringe: The Complete Third Season on DVD here today: http:bit.ly/o2MYBv ! Get caught up before season 4 starts!

I have been hired by Warner Bros. WBWord division to promote Fringe: The Complete Third Season on DVD/Blu-Ray.
Posted by collyn23 at 10:12 AM