I love this show. Its not the picture perfect family most shows have it is more like a real life family you know or are lol. The funniest show ever I love it and you bet Ill be tuning in tonight for season 2 premier. I also am going to be buying season 1 on DVD because I love watching all the episodes again and there are a few I missed so I need to see those. The Christmas episode had to be my favorite though lol. If you havent seen the show you have too. You'll love it. 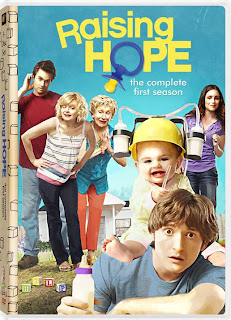 Season 1
On DVD Today!
Twentieth Century Fox Home Entertainment brings us the 1st Season on DVD packed with exclusive featurettes, deleted and extended scenes, a gag reel, commentaries and the un-aired pilot never shown on television.
Princess Beyonce
is a pretty great name, but we can see why the family changed her name to Hope.  We love unusual and fantastical names…from Apple to Pilot Inspektor, here are our top 10 unusual celebrity baby names complete with origin, background and meanings!
Moon Unit
With siblings, Dweezil, Ahmet and Diva, you know father Frank Zappa had out-of-this-world expectations for his daughter.  This original name means “one that orbits the moon”.
Pilot Inspektor
Jason Lee and Beth Riesgraf were inspired by the Grandaddy single, “He’s Simple, He’s Dumb, He’s The Pilot” enough to name their song after the tune.
Sage Moonblood
Sylvester Stallone gave his son this name that alludes to and mystical forces and wisdom, and must have fueled Sage’s creative side as he is an actor, producer, writer and director.
Fifi Trixibelle
Paula Yates and Bob Geldof named their daughter after Bob’s aunt Fifi and Paula wanted a “belle” in the family.  Her siblings, Little Pixie, Peaches Honeyblossom and Heavenly Hiraani Tiger Lily all enjoy just as exciting given names.
Moxie CrimeFighter
Comedian Penn Jillette named his daughter after the beverage Moxie, and CrimeFighter is derived from a line from one of his books.  The legacy will live on!
Apple
Gweyneth Paltrow and Chris Martin decided to name their daughter after a fruit because of the inherent sweetness, cleanliness and the lovely images the word conjures up in their minds.
Jazz Domino
Daughter of The Clash front man, Joe Strummer, Jazz is a proud feminist who loves crafting and was recently featured in Bust Magazine!
Petal Blossom Rainbow
Jamie Oliver and Jools kept the trend going after naming their first two daughters Poppy Honey and Daisy Boo.  Petal fits in with the floral themes; Blossom is “fresh”, while Rainbow is truly a “symbol of hope”.
Jermajesty
An heir to the Jackson kingdom, Jermaine’s youngest son will certainly be held in illustrious pop culture regard.
Posted by collyn23 at 10:21 AM