Yes I am preparing already for Halloween. I mean about a week ago I walked into my local Walmart and there is Fall decorations out and Halloween candy already out. Yep I said it already! With 6 kids I cant afford to buy all their costumes at once so I buy like 2 month for the 3 months or so before Halloween. I was lucky enough to get the chance to review my sons Zombie Hunter Costume through Wholesale Costume Club. 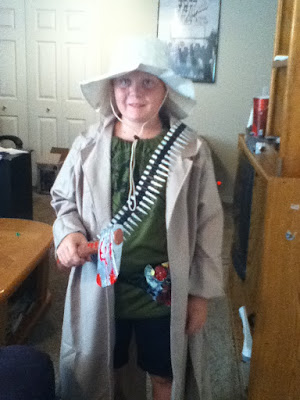 He was so excited to look through the costumes and find one he likes. The boys costumes only when to like a 12 and we were worried they would be too small for my son since he is a big boy for his age so we decided to look through the mens costumes in small sizes. He knew he wanted to be a Zombie or something similar so when we came across the Zombie Hunter costume he knew that's what he wanted to be so we ordered that one. I was surprised for being a men's costume the reasonable price on it because last year I spent $50 on a mask for my husband and it wasn't even the whole costume lol. 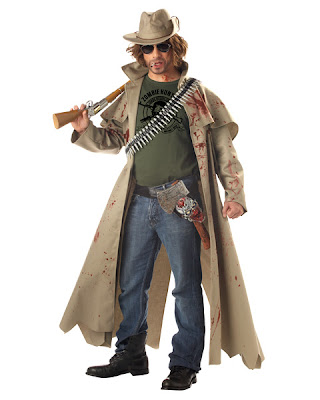 I have say how fast the shipment arrived we ordered it and within 5 days we had it. I was shocked. I was also shocked how heavy it was. The coat very well made and thick. It also came with the tshirt which is a great tshirt and very good quality. It had like a fisherman style hat which was a little different then the picture which was the only thing my son was disappointed about. The axe and axe belt holder and the bullet sling all tough and wont break before Halloween which is great. Trust me my kids had a hay day chasing each other around with the fake axe lol yes my kids are weird haha. Overall I was very impressed with the quality of this costume. It wasn't a cheap costume that breaks before you get your wear of it. This one will last years!

So if you are like me you have to check out all the awesome costumes Wholesale Costume Club has to offer at great prices. Stock up now before all the good costumes are sold out!
Posted by collyn23 at 10:23 AM

It's good to be prepared :)

It's never too late to find that perfect costume or like my daughter who changes her mind everyday. One day she wants to be Dora another a unicorn. Yikes :)
Wishing you a great day,
Barbara
Español para Niños (Spanish for Kids)