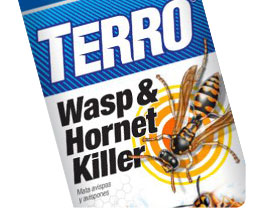 Its that time of season again when we spend alot of time outdoors and there are so many pesky bugs out there. The worse at our house is the wasp and hornets. They are everywhere and so vicious. Me and my daughter are allergic to them so it makes it even more scary. So when I had the opportunity to test out the  TERRO Wasp & Hornet Killer  you bet I jumped at he chance.

It arrived in the nick of time. They were starting to make nests under my deck and in my siding. We soaked the nests and area around it. The wasps hated that but too bad soo sad NOT LOL! With in a few minutes the wasps started to die or fly away and hopefully died as well. The spray lasted a week or two before they started slowing coming back so we just sprayed again and they left again. So it's not a permanent fix but alot longer than some of the other treatments I have tried. So if you have wasps and hornets like I do you have to try TERRO Wasp & Hornet Killer. It is located at most stores that sell bug killers and yyou can even follow them on Facebook and on Twitter.

We are giving away to 2 lucky readers some Terro Wasp and Hornet killer. Yay!

To Enter:
Fill Out Form
a Rafflecopter giveaway
Posted by collyn23 at 1:43 PM

We usually ignore the issue until we need an extirminator!

Washington them with hard stream of water from the water hose to knock down the whole nest, but never really works and risk of stings so this product sounds great thanks sewitupjulie@gmail.com

I'm entering for my brother, and I don't know everything he's tried but I know he tries to maintain a no wasp/hornet area by swatting it with a broom if a nest develops!! haha So, this would be a nice gift for my brother.

We have tried something that hangs on the tree and catches the bees when they go inside of it! I'm not sure what it is called! Thanks for the chance to win!

We try to keep them away by knocking down the nests, and running, as soon as we see them. The power washer water spray seemed to be better.
gourdsrmylife(at)yahoo(dot)com

We had a spray that killed any bug the flew. It worked great on flies, not so much on the bigger bugs!