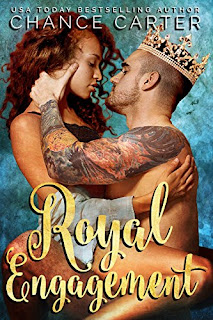 Chance has to be one of my favorite authors. His stories has tons of hot romance but they also have wonderful, enticing and addicting storylines. This makes a huge difference to me because there is only so much sex scenes I can read before your like okay wheres the story, connection, and the need come from. Chance gives you all that and more. His newest book a Royal Engagement was amazingly good. I don't no how he does it but he writes us a new amazing book almost every month. He is just that good I guess.

Royal Engagement starts off with a beautiful actress, Tamara, who plays in a TV series called Princess of Nowhere. She is in this country to film this season of her show. She's at a party with her sister who came to stay with her for a bit to get her self together. This party is a masked party and it sounds so fun. She meets this guy who decides they will role play tonight and be husband and wife and neither will no each others real name. Hense the problem at the end of the night after they hit it off and end up having the best sex of their lives.  When they finish Prince Alex's mask falls off and Tamara sees who it is and freaks out and rushes to leave, leaving Alex stunned and wishing he got her name or phone number.

Tamara stunned that she just slepted with the prince and she knows she doesn't need that kind of publicity in her life with the last publicity she got when she broke up with her jerk of a ex-boyfriend who is now working with her in the show. Tamara is a sweet American girl who loves acting and loves her family but hates to be in the spotlight with reporters. She can't get her mind off the prince though and she definitely can dream of more with him.

Alex is a prince with a reputable background of being a playboy. He has never found anyone to change his mind on never getting married He wants to have fun and he doesn't want to deal with his royal responsibilities. Tamara has changed all that and he can't get his mind off her. He wants more of her, he needs more of her, and she could be the one that changes him for the better.

This story has so much romance and fun and humor I just loved it! It makes you want a prince for yourself if they were all like Alex. Chance did an amazing job of bringing these characters to life and making me feel like I was in the story. I can see this being a series too. Id like to see the story of Tamara's sister and Triston as well as the story of Alex's sister Victoria . There are definitely some budding stories there. So if you want a awesome story pick this one up today and you will be glad you did.  Royal Engagement on Amazon
Posted by collyn23 at 9:11 AM