The past couple weeks I have been telling about why I like Rizzoli & Isles and well I am gonna tell you another reason lol but first I have really come to realize when you ask people their role models and their answers really surprised me. Not always in a bad way but other than parent and family members most of the role models were males. Can you believe that? I couldn't! There are some really powerful women in history that are awesome role models but there really needs to be more for these younger girls to idolize other than some of these crazy musicians and actresses. This is where my other reason for loving Rizzoli & Isles comes in. 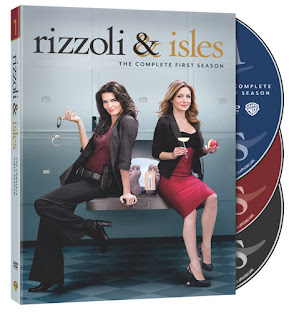 Rizzoli & Isles are two women in powerful positions who can accomplish anything they put their minds to while having an influence upon others. As such, the show empowers women with both characters coming from different points of view and background while remaining true to themselves in getting their job done. As a testament to this, Rizzoli & Isles won Best Drama at the 'Women's Image Network Awards' in 2010. This is awesome to see that yes women can be awesome cops or detectives or medical examiners or any other occupation that most think a typical man job and do a great job at it! I try to never stereo type anything for my kids. If my girls want to be a mechanic go for it or if my son wants to be nurse or whatever awesome. But mainly my girls because I never want them to thing something is for boys only. So to watch a show that has both main characters as very powerful females in very important jobs and they do it and kick butt showing everyone they are the best at what they do and influencing other to do their best as well. That is the type of stuff I like to see and let me kids see not that I would let me young ones watch this but only because the nature and graphics of the show might worry them but when they get older you bet I would let them watch it.

So if you want to see two empowering women that will be awesome role models who are funny, strong and interesting to watch then you have to check out Rizzoli & Isles plus you'd see the reason why they won Best Drama at the 2010 Women's Image Network Awards. The first season is now available on DVD: http://bit.ly/mt2Hpo

“I have been hired by Warner Bros. WBWord division to promote Rizzoli & Isles Season One on DVD."
Posted by collyn23 at 8:52 PM