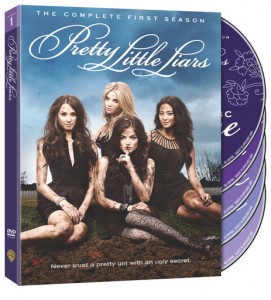 I must admit when I first seen the previews to this show a while ago I didn't think I would get into it. But after watching a episode or 2 I was hooked. Pretty Little Liars is suspenseful and intriguing to watch with engaging characters. This is what got me hooked and wanted to see more and more.  I can’t wait to see what the new season brings to the girls from Rosewood!!
One of my favorite episodes from season one is episode 6, “Never Letting Go,” where the girls are prepping for the Charity fashion show and discover that Allison’s mom has returned to Rosewood.   It’s fun to watch the girls sitting around gabbing about boys, girls, dating, sticky lip gloss and kissing and oh yea, a serial killer who’s stalking them!  Allison’s mom wants the girls to wear her gowns on the runway, in the show, as a tribute.  The drama is just never ending…
Haven’t seen Pretty Little Liars? Well here is a short synopsis:

When their best friend Alison mysteriously vanishes, four girls believe their secrets are safe forever. But when they begin to receive threatening messages from someone named “A,” the truth may be only one text away. Filled with mystery, scandal, intrigue and nail-biting suspense, Pretty Little Liars is based on the best-selling book series for young adults from Alloy. Set one year after the disappearance of Alison, the manipulative and vindictive queen bee, the one-hour drama revolves around four 16-year-old girlfriends –Aria, Hanna, Spencer and Emily — who have lost touch with one another until each begins to receive mysterious messages suggesting that Alison is watching them and knows their most private details they are desperate to keep hidden. Suddenly, living in their picturesque suburban community is far from perfect as secrets, lies and betrayals threaten everything they hold dear. Even after Alison’s body is discovered, the messages don’t stop….

Tune in every Monday evening at 8/7c on ABC to watch Pretty Little Liars.  Don’t forget that the new season starts January 2nd!    Missed some of the nail-biting suspense from last season? Make sure to get all caught up here: http://bit.ly/tupDF8!

I have been hired by Warner Bros WBWord division to raise awareness for ‘Pretty Little Liars.’
Posted by collyn23 at 9:46 AM

Email ThisBlogThis!Share to TwitterShare to FacebookShare to Pinterest
Labels: Review, reviews, The WB