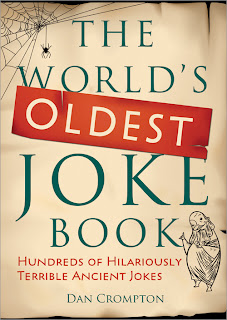 I grew up loving jokes. I remember being a kid and playing with my nieces and nephew and we would come up with all kinds of jokes lol. We would get joke books and joke shirts and anything we find that was funny and then we would torture my mom and my sister with all the cheesy jokes. We had a blast with them. So when I had the chance to review World's Oldest Joke Book I had to read it.

Synopsis:
Endeavors in philosophy and mythology immortalized the ancient Greeks, but what you won't find in the history books is their serious love of the funny. The same forefathers who imparted the Socratic Method and the Parthenon also passed on a wealth of filthy quips and goofy wisecracks. Some of these jokes still hit the mark, while others will have you groaning with laughter, even if it is because they're so bad, they're good. Examples: An idiot hears that a crow can live for up to 200 years, so he buys one to see if it's true. Ex 2: An Abderite owes someone a donkey, but doesn't have one. So he asks the guy if he can repay his debt in two installments.

Our Opinion:
Honestly I liked the book. Yes I can say some of the jokes were a bit much and cheesy but alot of them made me giggle. I love the idiot jokes and the drunk jokes. Something about idiots and drunks you can relate with these days and I think that's what make them so funny. I was impressed with the book and even my mom wants to read it. My oldest two kids wanted to read it and they thought some were funny too but there were alot that were way over there heads since it is about ancient times. I think this book would make a awesome present for Christmas for any joke lover in your life. So check out World's Oldest Joke Book. You will be glad you did!
Posted by collyn23 at 3:53 PM