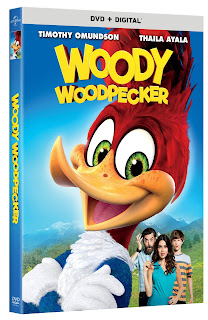 I am a 80's / 90's kid and I love sharing the toys and shows I used to watch with my kids. I am so glad my kids love watching these old movies and shows with me too. As a kids my favorite cartoon was Woody Woodpecker so when I found out they were doing a live action/ animated film I was so excited! I used to love the humor and trickery this bird always showed in each cartoon. His iconic laugh is something I will never forget. So I had to share this with my kids.

We got a advance copy of the dvd and I couldn't wait to sit down with my kids and watch it. We ll loved the pranks and humor in the movie. There was the perfect amount of action and comedy to keep us all entertained. Our age group varied from 72 down to 9 and everyone was entertained for the entire movie. There wasn't too much violence or anything so I would honestly say it is great for all ages. It is rated PG but I am guessing because of the mild violence from the poacher shooting tranq. guns and the all but honestly I really could see it rated G for all ages; it really isnt that bad. My girls thought is was hilarious and me and my husband laughed just as much as the girls. It has a great storyline with a happy ending that made us all smile. This would make a great family movie night movie. We all gave it 5 stars; 2 thumbs up! So check it out on February 6, 2018 on DVD, Digital and On Demand.  http://uni.pictures/WoodyWoodpecker

Company info and Synopsis:
Chaos ensues in the all-new family comedy, Woody Woodpecker, coming to DVD, Digital and On Demand on February 6, 2018, from Universal 1440 Entertainment, a production entity of Universal Pictures Home Entertainment. The film blends live action and CGI animation to tell the crazy and humorous story of an all-out turf war between the mischievous prankster and a big city lawyer who wants to build his dream home in Woody’s backyard. Directed by Alex Zamm (Inspector Gadget 2, The Little Rascals Save the Day), Woody Woodpecker stars Timothy Omundson (“Psych”), Thaila Ayala (“Rio Heat”), Graham Verchere (“Fargo”) Jordana Largy (Monster Trucks) and Eric Bauza (The SpongeBob Movie: Sponge Out of Water), as the voice of Woody. The Woody Woodpecker DVD and digital features deleted scenes and an exclusive inside look at the making of the film as well as the evolution of Woody’s iconic cartoon character.

Woody Woodpecker is back with his signature laugh, wacky antics and wisecracks in his first ever live-action/animated film. Woody must protect his forest home from Lance Walters (Omundson), who starts building his dream mansion in the forest with his son, Tommy (Verchere), and fiancée, Vanessa (Ayala). To make matters worse, Woody must avoid the clutches of two grizzly poachers. With a series of crazy hijinks to sabotage their plans, Woody proves he’ll stop at nothing to defend his turf. Get ready for laughs in this hilarious comedy about everyone’s favorite woodpecker!

Woody Woodpecker is a legendary icon created by Walter Lantz in 1940. Woody Woodpecker & Friends have entertained kids for more than 75 years! Woody Woodpecker cartoons appeared in theaters until they debuted on television in 1957. Woody’s popularity resulted in new shows airing across several decades. “The Woody Woodpecker Show” has been broadcast in over 155 territories and 105 languages worldwide. He is one of the most memorable cartoon characters in animation history, featuring the little red –headed bird with the unforgettable laugh, who’s forever pecking his way out of trouble. Woody has evolved from a cartoon TV character to a Pop Culture Icon with his fearlessness, crazy antics and smarts.


BONUS FEATURES on DVD and Digital
* Guess Who? The Evolution of Woody – Woody Woodpecker is one of the world’s most iconic animated characters. In this featurette, we explore how Woody’s look and personality have changed since his introduction in 1940.
* The Making of Woody Woodpecker – Filmmakers and cast discuss why this version of the Woody character is so appealing and how his brand of physical humor translates across audiences.
* Working with Woody – Filmmakers, cast and crew reveal the specific challenges of filming a movie whose main character is CGI.

Woody Woodpecker will be available on DVD and Digital.
*DVD offers the flexibility and convenience of playing movies in more places, both at home and away.
*Digital lets fans watch movies anywhere on their favorite devices. Users can instantly stream or download.
*Movies Anywhere is the digital app that simplifies and enhances the digital movie collection and viewing experience by allowing consumers to access their favorite digital movies in one place when purchased or redeemed through participating digital retailers. Consumers can also redeem digital copy codes found in eligible Blu-rayTM and DVD disc packages from participating studios and stream or download them through Movies Anywhere. MOVIES ANYWHERE is only available in the United States. For more information, visit https://moviesanywhere.com.