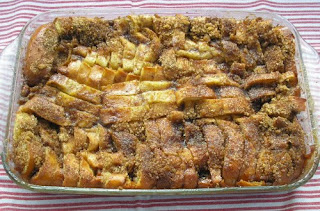 1/4 cup honey
1 teaspoon cinnamon
1/2 cup chopped pecans, walnuts or raisins
1 1/2 loaves French bread or baguettes
3 cups milk
12 large eggs
1/2 cup sugar
2 teaspoons cinnamon
1 teaspoon nutmeg
1/4 cup butter (1/2 stick), melted
2 Tablespoon sugar
2 Tablespoon brown sugar
1 teaspoon cinnamon
Direction:
Spray a 9 X 13-inch baking dish with vegetable spray and set aside.
In a small saucepan under low-medium heat, melt 1 stick butter, 1/2 cup brown sugar, honey and 1 teaspoon cinnamon together and stir until blended and sugar is dissolved. Stir in nuts or raisins. Remove from heat, and spread in bottom of the baking dish.
Slice bread into 1-inch thick slices, take the whole loaf in your hands and place it in the pan on top of the sticky goo. It'll look like the bread is still in the form of a loaf, only sliced.
In a large bowl with an electric mixer, or a hand whisk, whip the milk, eggs, 1/2 cup sugar, 2 teaspoons cinnamon, nutmeg and butter until mixed well and frothy.
Pour the milk and egg mixture slowly over the bread, opening up the slices to allow the liquid to get in between the bread. Press down to make sure all the bread is wet. Cover with plastic wrap, and press down once more to assure all the bread is soaked. Refrigerate overnight.
Next morning, preheat the oven to 350 degrees F. In a small bowl, mix 2 Tablespoons sugar, 2 Tablespoons brown sugar and 1 teaspoon cinnamon. Remove the plastic wrap and sprinkle the Overnight French Toast with the cinnamon sugar.
Bake for 45 - 60 minutes or until bubbly and the middle of the French toast is done. Do not over bake. It'll still be a little jiggly in the center.
Remove from oven and let cool 15 minutes before serving. Be careful, as this Overnight French Toast stays hot for quite a while!
Cut and serve with pure maple syrup and whipped cream if desired.
Serves 8 - 12 or more. This recipe can be divided in half and baked in an 8 X 8-inch pan
Posted by collyn23 at 12:47 PM